A Dose of Positivity


"What's the result of your ultrasound? , mom asked anxiously.

It was in 2007, When I was diagnosed with Adenomyosis known as "Endometriosis of Uterus", with adenomyoma and Endometriotic Cyst on my left ovary. I was never surprised at that time because I thought that maybe it is genetic. Two of my cousins underwent surgery. My cousin, who is a sphinster, had cystectomy and another cousin of mine had hysterectomy.

My ob-gyne at Philippine General Hospital prescribed an oral contraceptive  *Althea. Generally, a contraceptive is known for preventing conception, but in my case, Althea served as a medication to control Endometriosis. It is a condition wherein during menstruation, bleeding occurs outside the ovary, causing dysmenorrhea and pelvic pain — sometimes one may mistaken it as a natural pain caused by the menstruation, almost every woman has to endure every month in varied degree.

At first, I would ask my mom to buy these pills for me. I thought it was so embarrassing to buy them at the drugstore because people are judgmental, they might think I am promiscuous.But when I found out that a lot of women ( some even youger than I am) are using pills to fix their hormonal imbalances ; some for aesthetic purposes -as it also treats acne bulgaris, since then I did not mind buying it at the pharmacy.
I took this medicine for 6 months but the size of my ovarian cyst barely reduced. The specialist gave me depo-trust injectables as an alternative because she didn't want me to undergo laparoscopy. My ovarian cyst indeed reduced its size in the result of my second ultrasound but the side effects on my skin was unsightly, I developed skin rashes so my doctor recommended me to take Althea again but this time around I would drink it without 7 day- interval for the purpose of  repressing my monthly period. I also took Yasmin, though it was thrice expensive than  Althea. I got Yasmin for free because one of my friends is working at Bayer so she gets it for free and gives it me.My OB told me that all contraceptives are "almost'' the same. Since I can get Yasmin for free from my sponsor she told me that it safe to take it in lieu of Althea. 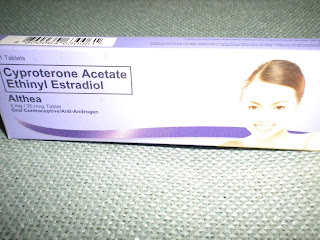 Eventhough "Endometriosis of Uterus", is benign and does not cause cancer, I had anti-cervical cancer vaccine "Prevention is better than cure" as the saying goes. I also reduced eating fatty , oily and fast foods. I shunned away from processed food especially those with hydrolized protein and MSG. Raw vegetables, fruit juices and white meat became part of my daily diet.I became a devotee of Saint Peregrine Laziosi ,patron saint of the sick and afflicted with cancer. My ovarian cyst dramatically reduced its size.Thus, I still have to visit my ob-gyne periodically.
I stopped taking OCP in September 2010. A month before my husband and I tied the knot as I had to detoxify my body in preparation for pregnancy.
" You might have difficulty becoming pregnant"; my ob-gyne uttered without beating around the bush.
" But it is not far from impossible ,right doc?" I retorted positively.
" Absolutely,that is why obstetricians are here,we 'll do everything we can.Get married and have a baby" ,  My ob-gyne said with a smile on her face.

__________________-
*These days most dermatologist prescribe OCP (Oral Contraceptive Pills) to patients with acne bulgaris. One of the most popular brand is "Althea" because it is cheaper and it doesn't have severe side effects. A lot of women who have tried this product attested that their skin became clearer and their menstrual pains disappeared. Being a Pro-life advocate, I  do not recommend women to take OCP,due to its abortifacient agents, unless prescribed by their physicians women must be aware of the risk factors.

Email ThisBlogThis!Share to TwitterShare to FacebookShare to Pinterest
Labels: HEALTH